So finally there’s a reason why it’s better to be a country music fan in the UK than the good ole US of A: we’re not experiencing any of the furore surrounding the radio play time (or lack thereof) of Little Big Town’s beautiful song, ‘Girl Crush’. 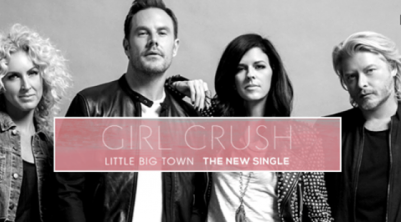 lly, I have to admit that ‘Girl Crush’ was probably never going to get much airtime on mainstream UK radio but that’s more because of the blank states you get here when you mention Little Big Town than any ideological or political qualms.  Local online country stations (the only place you can listen to country music, as far as I can tell) don’t seem to have any reservations about playing this song.

Frankly, I think this song displays, on the part of a Little Big Town, a little bit of genius, musically, vocally and lyrically – it draws you in and holds you from the first notes and words.  Let’s face it, it’s a really clever, haunting song and LBT are showing some chutzpah in releasing this single – they had to have been anticipating some backlash, no matter what they’re saying.

And yes I know, different strokes for different folks … we’re dealing with a different culture, context and experience – and it’s often these differences that attract us to country music – but what leaves me jaw-dropped stumped is that even after the detractors have listened to the whole song or had it explained to them that this song is about jealousy and insecurity (and not some agenda), they still don’t want this song played.  How does that work?

That is, if the whole thing isn’t a fabricated controversy … which even ever cynical me doesn’t want to believe.

Congratulations to Little Big Town on a beautiful song and pushing back against those who want to put country music in a small box.

What are your favourite country songs that have ruffled feathers?