I had the honour / torture last week of being asked for Nashville tips from three separate jammy people off for their first trips to Music City. Now that the initial jealousy’s died down, I’ve realised these chats have been the perfect chance to go on and on about Judi’s and my Great Nashville Trip of 2015 to people who might actually be interested. Not just my mum. And to bombard the world with my holiday pics.

Before my own Nashville trip, I desperately tried to temper my excitement, afraid that this mecca I’d been dreaming of for decades couldn’t possibly live up to the magical land it had become in my mind. But, in fact, Nashville surpassed my wildest country music fan dreams. There was music everywhere. Food was coated in whiskey. The streets were paved with cowboy buskers and boot sale signs.

So, for those of you lucky enough to have a trip on the cards, here’s a round-up of my favourite spots. For me, Nashville wouldn’t be Nashville without… 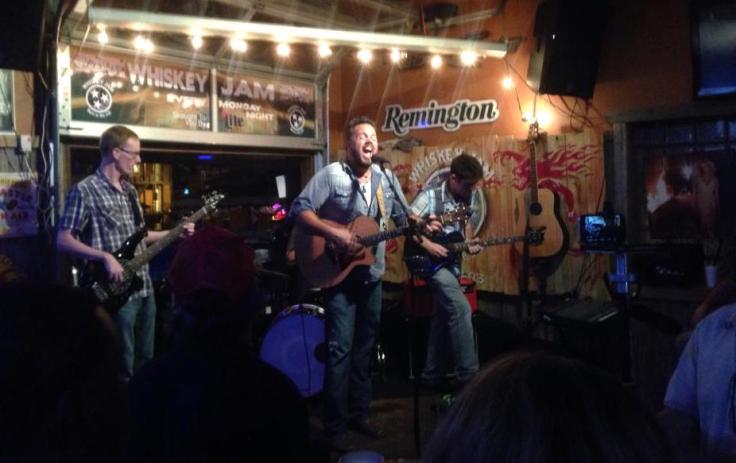 Roberts Western World: Don’t be fooled by the many, many neon signs on Broadway – the best is not always the brightest. The must-go (I mean it) late night bar is Roberts. It has a much humbler sign than it’s rivals but houses a famous honky-tonk house band, a comically surly bar tender and is only just missing the spit and sawdust. I perched by the bar and ordered a PBR because I’d heard of it in so many country songs. This was a mistake as it’s a cheap but not cheerful beer but it probably provided just enough courage for me to say yes when asked to two-step with an old geezer in a Stetson. The bar’s real heritage comes from the fact its back door shares an alleyway with the stage door of legendary music venue The Ryman and so it became the drinking hole Johnny Cash and cohorts would apparently sneak out to after sets. We thought this might be hype but when we popped in after the ACM Honors Show at the Ryman several of the musicians rocked up too and I even bumped into Kelsea Ballerini in the loo. How’s that for a claim to fame?

Monday Night Whiskey Jam: Over on Division Street you’ll find a buzzing strip of bars that are less of a tourist trap than Broadway. Here two neighbouring bars stand out, Winners and Losers. On Mondays after pre drinks in Losers, locals flock next door to Winners for incredible free live new country from top musicians, up and coming artists, and the odd country legend. Sadly I wasn’t there the night Chris Young popped on stage for an impromptu gig. 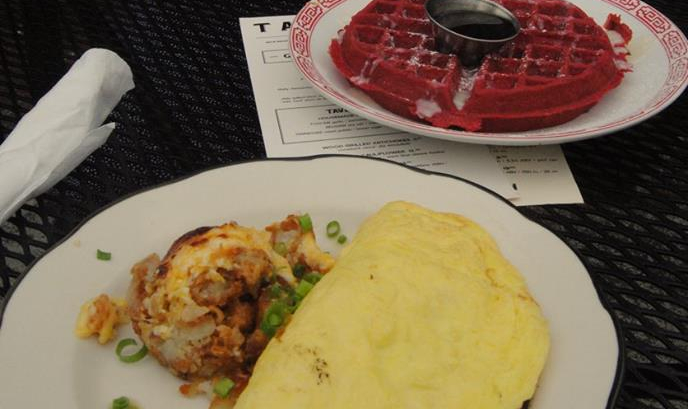 Tavern, Division Street: It may be a rose-tinted memory but I think was the best breakfast I’ve ever had. It’s an odd accolade since none of the things I ate were typical breakfast foods (and I adore breakfast foods). There will be probably be queue for Sunday brunch but you’re able to either wait at the bar with cocktails or go for a wander (the famous music row studios are nearby) and they’ll text when your table’s ready. Whatever you get, you have to also try the white trash hash as a side. It’s a dirty mash-up of cheese, potatoes and general gooey goodness. This was also where I learnt that breakfast dessert is acceptable, so followed main breakfast with the red velvet waffle.

Pancake Pantry: This place has all the atmosphere of a 1970s retirement village canteen. But you don’t go there for the atmosphere. You go there because they have 23 types of pancake including ones made with sweet potato.

Hattie B’s Hot Chicken: This fried chicken joint is a Nashville institution. ‘Hot chicken’, a spicier take on your KFC style grub, is Nashville’s speciality and while you can stop here for any meal, their Sunday brunch offers the famous southern combo of chicken and waffles.

…Curious Places on the Outskirts 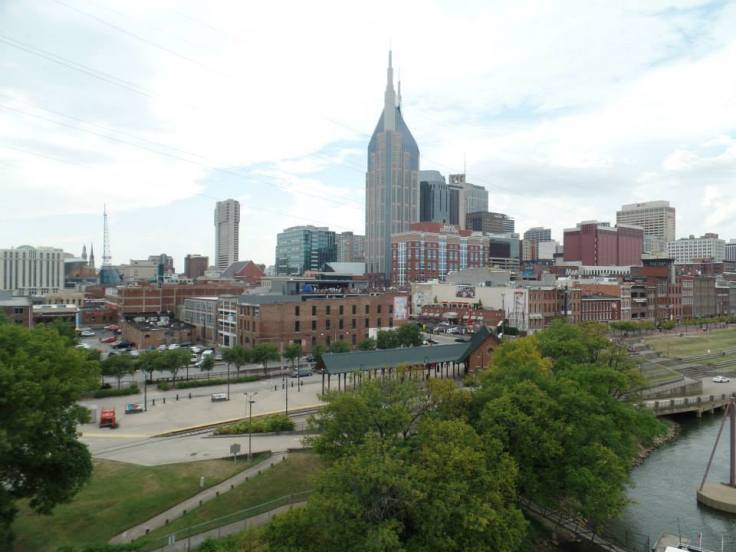 Puckett’s of Liepers Fork: About a 25-minute picturesque drive from Nashville, this is a small town feel grocery store / canteen. Pulling up it felt like the TV set of some American drama where the unsuspecting locals were about to be plagued by an alien invasion. It was lunch time and we parked next to the sheriff’s car and on our entry the heads of three blokes in dungarees with white beards and trucker caps turned sharply. The menu board read “meat & greens”, which were dolloped out by a friendly dinner lady fascinated by our British accents. They also have live music nights where apparently local residents like Tim McGraw and Faith Hill pop in from time to time. (Don’t confuse this with the city branches of Puckett’s which have now opened).

The Full Moon Pickin’ Party: May to October on the Friday closest to the full moon, Warner Park is transformed into a free-spirited affair. It’s a boozy night out under the stars with bluegrass music and where you can bring your own small instrument along to join in a jam session.

Santa’s Pub: In the middle of a residential area, there’s a car park. In the car park, there’s a large mobile home. In the mobile home is karaoke dive bar. It’s the kind of place jagerbombs will happen and you might get in a fight with a 21-year-old. Be warned this surreal spot is not the country music crowd.

…The Heritage and History 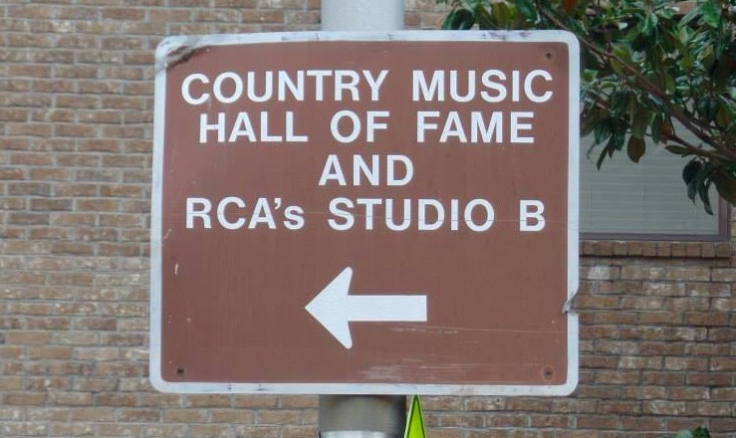 The Grand Ole Opry (Of Course): You should visit this one early in your trip as you’ll probably want to go back. On every show the line-up rivals the best nights at C2C festival with a mix up of huge names old and new performing and is brilliant value from $38. The backstage tour beforehand had me in tears for some reason and is a real education for country music fans or just fans of the TV show Nashville. If your trip is on a special occasion and you’re more organised than me you can book well in advance for the VIP tour which lets you onto the stage for the evening show as the first act is introduced.

The Ryman Auditorium: This church building and former home of The Grand Ole Opry is known as the Mother Church of Country Music. Grab a pew (literally) in the stalls to witness intimate, potentially legendary moments.

The Bluebird Café: unassuming from the outside, but famous for being the breaking ground for new talent form Garth Brooks to Taylor Swift who were both discovered under the iconic blue awning. There are now massive queues because of its prominence in TV show Nashville. So if you’re planning on trying one of the Songwriter nights, arrive even earlier than you think is early.

The Country Music Hall of Fame: This interactive museum is worth the entry fee. It takes you through from the country music pioneers to contemporary chart superstars (there was a surprising Luke Bryan exhibition on for my visit). Then, there’s what may have been the kids section but where I spent most of my time – a giant guitar slide, touch screen quizzes and a chance to attempt a recording of a country song. I can not apologise enough for what I did to Wagon Wheel. 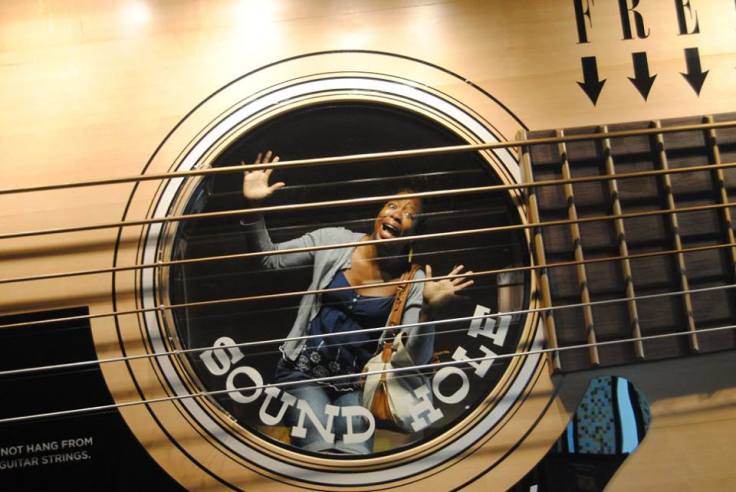 I hope you have as brilliant a trip as I did. Please share your Nashville tips in the comment section below.

One thought on “Nashville Wouldn’t be Nashville Without…”