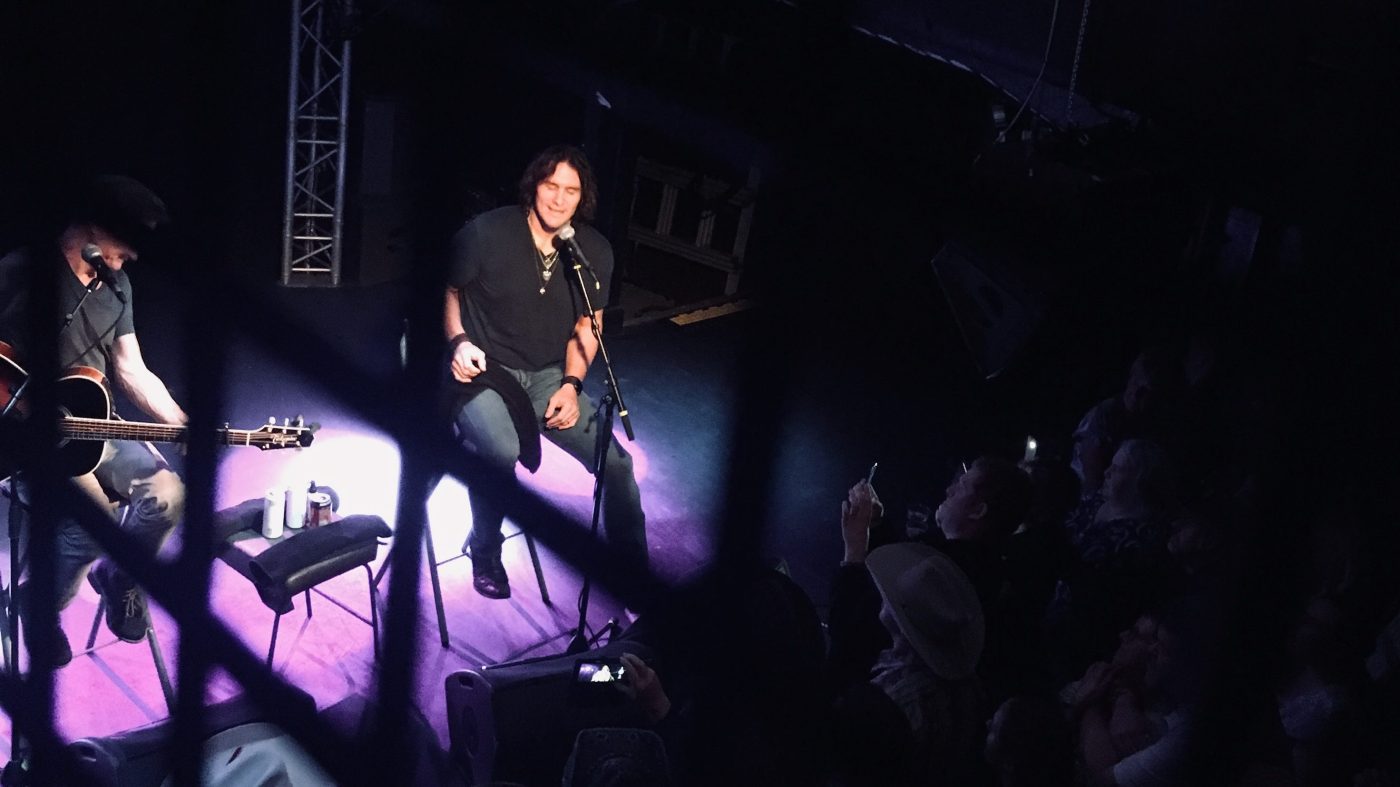 The year was 2002. I didn’t have a smartphone to google what exactly a Coupe de ville was, but my young heart understood the sentiment. I too had known the agony of Brokenheartsville. I’d been there when I’d spotted Tony talking to the new girl at college. So yes, here’s to the past they could indeed kiss my glass… of some sugary alchopop because I couldn’t shoot whiskey yet.

For the younger me (the one who had converted ‘75’ into Celcius to check exactly how sunny it was, and who had yet to lose three jackets on different tequila-fuelled nights out) Joe Nichols touring in the U.K. this week was a big deal. I was giddy as I raced down to Bristol’s former cargo ship gig venue, Thekla, after work.

Joe had just come up on stage as I walked in (earlier than planned because the support act had reportedly missed her train). He broke straight into his upbeat hit What’s a Guy Gotta Do and my Monday night was already made. But – apart from being the first night of his first U.K. tour, this show had an added layer of pressure for the country singer.

I’ve gotta tell you I’ve got a massive fear of boats…” he confessed to us “and tonight the fear just got heightened.”

We didn’t dare tell Joe the ship we were standing on had just come out of the dry dock where it had undergone three months of repairs. But it meant that his usually emotional song Impossible unleashed amused / nervous giggles from all of us as he sang the refrain;

He looked up at those watching from within the cage of the upper deck and remarked he felt like he was playing in San Quentin prison.

Joe’s confession about his ship nerves set the tone for what would be an intimate, personal night – almost as though he’d popped around to my student halls to for an impromptu jam session. The venue was small enough for plenty of banter with the crowd (though he struggled to understand the overzealous Welsh bloke who kept trying to interact and some of the stronger West Country accents).

Bravely, he had chosen not to have any sort of set-list. Instead, he opted to take requests for the whole night which he quickly discovered was a riskier than usual thing to attempt with U.K. audiences. For, while in America he can probably predict the big hits the crowd will demand, here we weren’t too sure which his big radio hits had been. His first albums were released before Chris Country Radio graced our airwaves and you could see Joe’s initial surprise when we began to call out long-forgotten album cuts. He handled it with the charm and humour that dominated the night.

“I love y’all knowing these album cuts. I’m just mad that I don’t…” he joked.

With just two of them on the stage for this acoustic show, the Bristol crowd put Joe’s memory and the skills of his guitarist Brian to the test. Fortunately Brian had been with him for 24 years and so, even if lyrics were foggy, his fingers remembered lesser performed tracks like Blues Man. Joe seemed genuinely touched; thanking us time and time again for knowing the songs he’d loved enough to put on an album but which never made it to radio.

“It means the world to me that someone else dug it” he replied before performing If I Could Only Fly, as one lady had called out for.

But, the one song we all agreed on needing to hear was Tequila Makes her Clothes Fall Off. I managed to resist buying a £30 fire engine red, racer back vest with this written on it at the merch stand and opted for a sensible grey Never Gets Old album t-shirt instead. And though it was a Monday night, we did a swift Jose Cuervo shot in honour of all the nights I’ve danced to this floor-filler at events like Nashville Nights. This, undoubtedly biggest hit, was Joe’s last song of the night – without the tiresome ritual of a fake encore.

For 1 hour and 15 minutes, I had been in my element for as I knew I would be. It’s why I’d chosen not to bring the non-country-fan boyfriend along – I didn’t’ want anyone’s potential judgement to rain on my unapologetically country parade. In fact, Joe told us he’d been rejected 31 times when he first got to Nashville for being too country, at a time when much of the country chart was “pop and cross genre like we have now”.

After the show – in a very undignified fan-girl moment – I finally got to ask Joe something I’d been wondering about for almost 20 years; about his apprent obsession with Coupe de villes (the car type I’d heard referenced in at least four of his songs). It turns out, his family had actually had one when he was a kid, but the real reason was after the success of his hit Brokenheartsville Nashville songwriters bombarded him with songs featuring the iconic American car style. This was a much simpler explanation than the twisted backstory I’d imagined…

You can still catch Joe Nichols in the U.K. this week:

P.S. Pretty sure Thekla was built to make it impossible to get decent phone photos so thank yu mathew Evans for providing some of his!